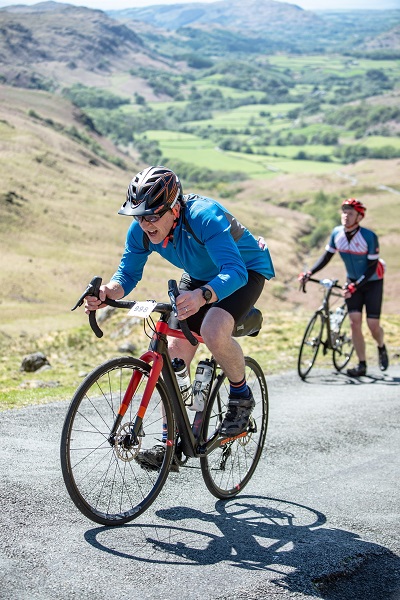 Paul Balfe, Technical Consultant at Rapierstar, has completed one of the toughest challenges for amateur cyclists, fulfilling a long-held ambition and raising funds for MacMillan Cancer Support, the North West Air Ambulance and several other charities.

Covering more than 115 miles in around nine and a half hours and climbing 3,500m, Paul took part in the 2019 Saddleback Fred Whitton Challenge, one of the most popular sportives in the UK which is famed as being particularly difficult. The route around the Lake District starts at Grasmere and takes in climbs of Kirkstone, Honister, Newlands, Whinlatter, Hardknott and Wrynose passes, ranking alongside European events such as the Marmotte in terms of difficulty.

It was the cycle ride of a lifetime for Paul, who was keen to push himself to complete a route that far exceeds his usual level, with the motivation to raise funds for MacMillan in memory of family and friends whose lives had been tragically cut short through cancer. Paul raised over £200 individually and donations are still coming in, but the annual Saddleback Fred Whitton Challenge will raise thousands collectively, an event which was originally organised in honour of the late Fred Whitton who was a great advocate for cycle sport in Cumbria and North Lancashire.

Paul says, “Many thanks to everyone who sponsored me – MacMillan Cancer Support and the Air Ambulance are very worthy causes for your hard earned cash. The support of the local people on the ride was awesome - it felt like being in a professional rider, I’ve never experienced anything like that before.

“The crowds of supporters on the route were amazing and really spurred me on. I spotted the MacMillan Cancer Support crew on the Whinlatter climb and that brought a lump to my throat! There were some tough moments going up the Hardknott pass but people just kept giving the riders encouragement. Even little messages people had written on the road like "dig deep" "nearly there" and finally "well done". It was an amazing experience and sense of achievement. Surprisingly my body feels fine - just shows how resilient the body can be with endurance events like this, it really is mind over matter.”