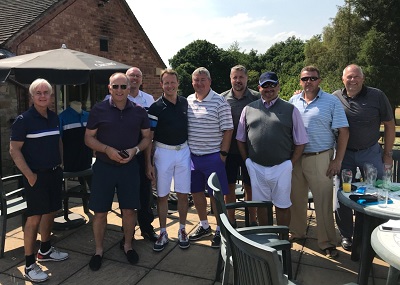 Preparations are well under way by the challenger team aiming to upset the odds in round two of this year’s Ryder Cup style GMF Cup Challenge, a charity golf event taking place at Quinta do Logo in September.

The team, which brings together individuals from businesses working in all areas of the door and window industry, took the opportunity recently to play a valuable practice day at the Astbury Golf Course in South Cheshire. They will play the incumbent champions, Team GMF, in the GMF Cup. This prestigious bi-annual event is organised to replicate the famous battle between the USA and Europe whilst – most importantly – raising much-needed funds for Hope House Children's Hospices, who support terminally ill children and their families.

Team Challenger’s practice was an essential part of the preparations ahead of what looks set to be a superb fundraising golf event according to David Furness, managing director of Rapierstar, who organised the practice day, for Team Challenger, at his local club.

David says: “We’re all delighted to be taking part in the GMF Cup Challenge this year, and to be able to play our part in raising funds for charities that do such amazing work. But we also want to give it our best shot when we tee-off and, as with any great team effort, part of that is proper preparation and practice. Getting everyone in the Team Challenger together at Astbury proved just the trick, and we’re ready to go into September’s event to win!”

Established in 1996, GM Fundraising has now raised more than £1,800,000. The majority of these efforts have been on behalf Hope House Children’s Hospices, who provide palliative care for children with terminal conditions and support for their families, both on site and in their homes. Hope House receives only nominal support from the government, with over 90% of its £5.5 million annual operating costs being met by charitable donations and GM Fundraising is proud to be their largest single donor.